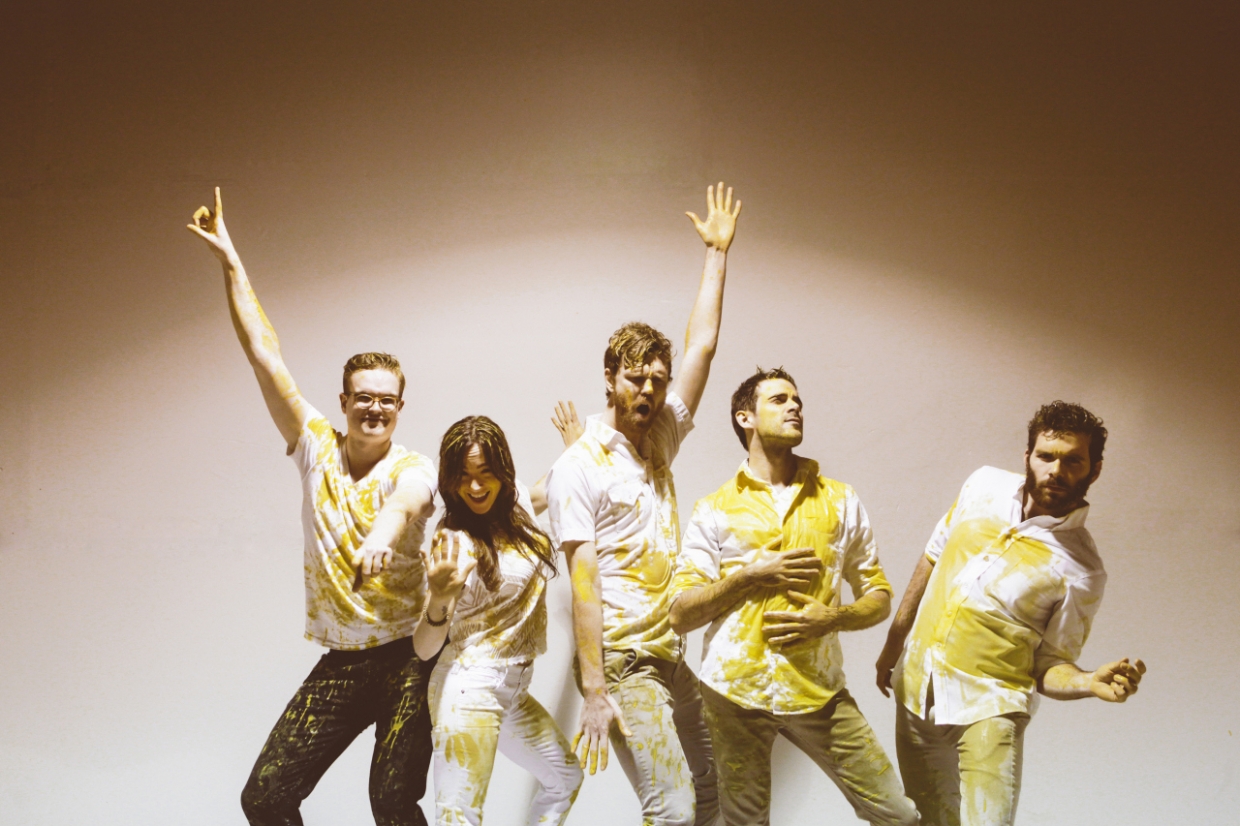 The spotlight on Nashville, with its musical values and timeless traditions, is currently bright. And no band embodies what’s right about 21st century Nashville more completely than the quintet known as Humming House, “…a solid Americana band with Irish folk influences and a tight live show.” Consequence Of Sound

It’s the way they weave together threads of Music City’s folk, soul, and bluegrass legacies. It’s in the inspirational and revealing songwriting. It’s in their acoustic instrumentation, presenting mandolin, fiddle, acoustic guitar and bass in fresh roles. It’s in the pleasant tension between rousing energy and nuanced arrangements. And it’s in the voices, with two complimentary stylists up front and backed by the full band’s rapturous harmonies.

Revelries, released March 24, 2015 on Nashville label Rock Ridge Music, is the third recording bearing the Humming House name, yet it’s something of a debut. Version one of the band came together in 2011 when songwriter Justin Wade Tam called on some friends from a local Celtic music jam to flesh out recordings of songs he’d written. The sessions, assisted by Tam’s star producer colleagues Mitch Dane and Vance Powell, mixed strains of bluegrass and Irish braided with vintage swing and open-throated early 60s hootenanny folk music. Humming House earned some quick attention for videos of its infectious songs “Cold Chicago” and “Gypsy Django.” They landed performance slots with tastemakers such as Lightning 100, Daytrotter and the Americana Music Association festival. They had chops, respect, and trajectory.

After that, two personnel additions galvanized the band. Leslie Rodriguez brought a lustrous female vocal to mesh with Tam’s hearty singing. And fiddler Bobby Chase brought classical training and down-home fire. That rounded out a band of highly skilled instrumentalists, including Josh Wolak on mandolin and Ben Jones on acoustic bass. Between the five of them, there’s scarcely a genre or period that somebody in the band hasn’t spent time learning or embracing, from Leslie’s early love of show tunes to Josh’s time playing bluegrass to Bobby’s occasional beat boxing. They’re the picture of East Nashville’s melting pot musical culture, and Revelries is the first album these musicians have written, arranged and recorded together.

As complete as they are in the studio and on record, Humming House is fundamentally and emphatically a live band. With scarcely a tube’s worth of amplification or electricity and a drum kit’s worth of percussion distributed among the band members, they emit force on stage and demand attention. They’ve rocked rooms of all sizes and played Forecastle Festival, Bristol’s Rhythm & Roots Festival, and the Cayamo Cruise with the elite of Americana. They opened the new Music City Roots hall in The Factory in 2014, sharing the bill with Emmylou Harris and Rodney Crowell.

Vocals are the emotional core and lure of Humming House. They are five voices deep, with a galvanizing male/female twin attack over the top. Tam and Rodriguez sing as soloists or a duet, depending on the song. Humming House works out careful hand-offs and big harmonies, including frequent passages that are just vocalizing, chanting beautiful music on top of their robust instrumental attack.

The title of Revelries comes from a lyric in the tenth track on the album, “Carry On,” a feisty and ambitious song in which delicate charango plays counterpoint to a muted guitar. The rhythm is jagged and intoxicating. By the time we get there we’ve heard the striding opener “Run With Me,” the quick-stepping waltz “Fly On” and Leslie’s showcase song, the smoldering and bluesy “Nuts, Bolts and Screws.” The album’s first single, “Great Divide,” is a fervent ode to travel, motion, and new frontiers—a recurring theme that’s also touched on in the fiddle and accordion-driven “Hitch Hike” and the rapturously romantic “Freight Train.” A classic jazz ribbon of smoke drifts through the magic “I’m A Bird.” And then, after “Carry On,” Revelries concludes on the drifting “Atlantic”—a throwback folk song that evokes old sea shanties.

If the new Nashville means anything, it’s about musicianship and authenticity. Quite often that results in sounds that are fascinating and appealing to critics and fellow musicians. Occasionally, artistry emerges that’s both profound and widely appealing. And when it does, as with Humming House, it’s cause for revelry.